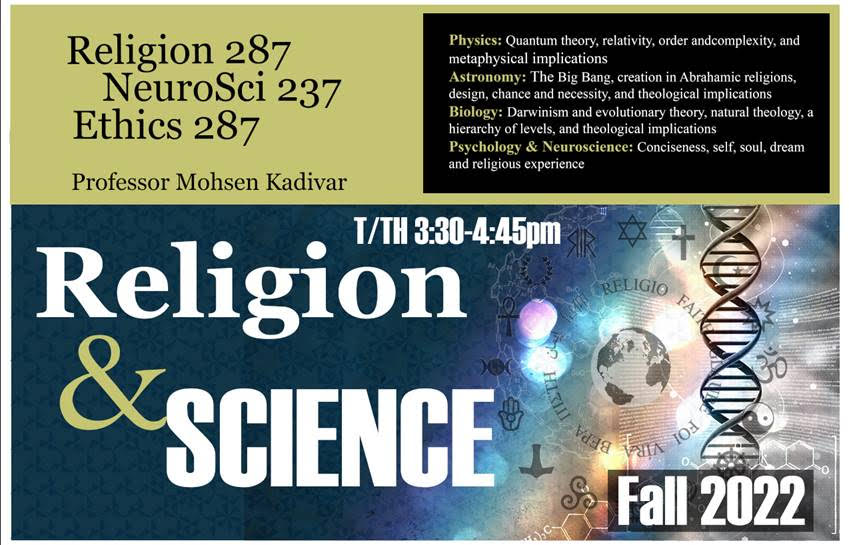 Religion and Science are arguably the two most powerful social forces in the world today; however, they are widely perceived to be in irreconcilable conflict. This course provides an introduction to the crucial ongoing questions and arguments in this controversial field. Our view of the nature of the universe and of the place of humans within has changed completely in the last century from anything that could have been imagined in the past.

Here are some key questions that will be discussed in the course: Science or religion, or science and religion? How did the universe begin? How will the universe end? Is evolution compatible with creation? Do the laws of nature exclude miracles? Is science the only credible path to truth? Can science provide a wholly naturalistic explanation for moral and religious beliefs? Has science made belief in God obsolete? Does science allow for the divine? And finally, what is the place of religion and God in an age of science?

Religion does not mean exclusively Christianity, but as well other major world religions include Judaism, Islam, Buddhism, and Hinduism. Although we will discuss the relationship between religion and natural sciences in general, the focus sciences are four: physics, astronomy, biology, and psychology & neuroscience. These are the major subjects of each science that will be discussed in the course: first, physics: quantum theory, relativity, order and complexity, and metaphysical implications; second, astronomy: the Big Bang, creation in Abrahamic religions, design, chance and necessity, and theological implications; third, biology: Darwinism and evolutionary theory, natural theology, a hierarchy of levels, and theological implications; fourth, psychology & neuroscience: conciseness, self, soul, dream and religious experience.