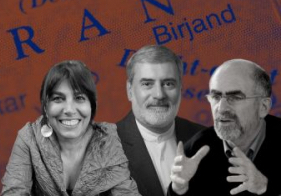 In support of Protests in Iran 

This is the fourth big protest since 2019 in Iran. Iranians are outraged with grievances that won’t soon go away. This is not only about freedom for women (especially their hair covering), but freedom for the country from the ruling of the minority over the majority, freedom of a style of life, against the mandatory style of life. The majority of Iranians support a democratic, secular regime. The government blocked all the ways of reforms. There’s no way for the people, except to come to the streets and protest.