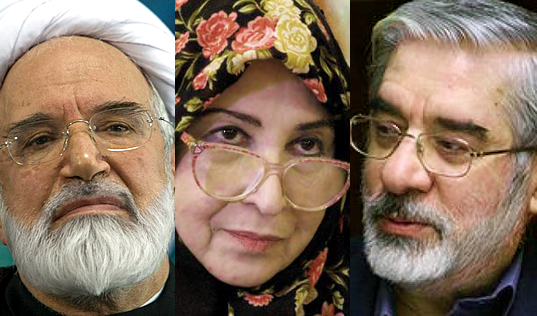 To the President of the Islamic Republic of Iran

We, the undersigned, a group of university professors in North America, would like bring a humanitarian request to your attention in your capacity as the highest elected official of the Islamic Republic of Iran.

We request your urgent attention to the continued house arrest of Mir-Hossein Mousavi, Mehdi Karroubi, and Zahra Rahnavard, three prominent political critics of the Islamic Republic of Iran who have been placed under house arrest since February 2011. For over six years, they have faced the hardships of unwarranted punishment, and all three suffer from multiple ailments. They are, respectively, 79, 75, and 71.   First and foremost, ours is an ethical and humanitarian plea.

Recalling that during the elections of 2013 you introduced yourself as a man committed to upholding the rule of law, we find it most suitable to request that you address this issue as such. No legal system among nations, including Islamic law that forms the basis of the legal system in the Islamic Republic of Iran, justifies the punishment of citizens without due legal process. Placing political dissidents under house arrest is a transparent example of such persecution.

Mir-Hossein Mousavi has been the last person to hold the office of Prime Minister in the Islamic Republic of Iran from 1981 to 1989; Mehdi Karroubi headed the Islamic Consultative Council (the Iranian parliament) (1989-1992, and 2000-2004); and Ms. Zahra Rahnavard has served as rector of Al-Zahra Women’s University in Tehran, 1998-2006. Mr. Karroubi and Mr. Mousavi both had run for president in 2009, and like a sizable part of the nation’s populace they protested against what they considered malfeasance and fraud in the electoral process. The fact that responsible criticism from such high-profile individuals is not tolerated in the Islamic Republic of Iran indicates the difficulty ordinary citizens face in voicing their criticism of the political process in Iran.

We acknowledge that lifting the detention imposed on these individuals goes beyond the authority of the executive branch in the Islamic Republic.  What compels us to address our letter to you is to protest against your silence toward this grave miscarriage of justice. Unless and until effective steps are taken by your administration to address this situation, including preparing the grounds for a public legal trial of the accused in a credible court, the international community will not be convinced of your administration’s resolve to make effective domestic reforms.

We implore you to take immediate and effective measures to end the house arrest against Mir Hossein Mousavi, Zahra Rahnavard, and Mehdi Karroubi. We also ask you to honor your pledge and to bring about the release of all the other unjustly incarcerated political prisoners. As stated in Mr. Karroubi’s open letter of April 9, 2016, should the lifting of his house arrest fall beyond your ability, we request that at least the accused are granted their day in court to defend themselves.

Thank you for your earnest attention.